Posted on November 3, 2016 by Accidental Suburbanites 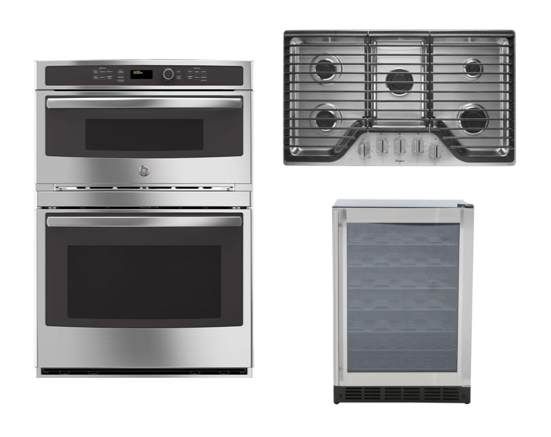 When we bought our home, we inherited a kitchen full of beautiful stainless steel appliances. As we belly-flopped down the slippery slope of a full-blown kitchen remodel, those appliances were a sort of silver (stainless steel?) lining: “At least we don’t have to worry about appliances,” we’d tell ourselves as we grimaced through the cost of upgraded hinges and roll out trays.

But as cabinet plans were reworked and adjusted to build around our existing appliances, we started to reconsider. It turns out the appliances, however nice, were very specific to the former kitchen configuration. Between a down-draft stove and a smaller-than-average built-in microwave, we wondered if it was worth all the effort to build a kitchen around such specific appliances (that would eventually be ridiculous to replace).

So we decided to price out the cost of a hypothetical upgrade to all-new, all stainless steel, really nice appliances…

First up was this 36″ five-burner Whirlpool gas built-in cooktop to replace the slide-in downdraft stove / oven unit (because who wants a clunky slide-in when you can have the sleek look of a built-in, right?!)

If we were going to commit to 86ing the slide-in, we’d need an awesome built-in double oven, too (duh). Since we were replacing both a microwave and an oven, we decided the most practical solution would be a stacked combo unit.

This ended up being the biggest splurge. When we started shopping around, we quickly realized that wall ovens can easily end up being the most expensive appliance purchase for a kitchen.  We also realized that the decision to buy new appliances would ultimately hinge on whether we’d be able to find an affordable oven.

After a lot of shopping around, we found this 30″ GE microwave / oven combo unit. 50% microwave, 50% oven, 100% awesome. Even better? We found it at an amazing price from Goedekers (who are, by the way, one of the best companies we worked with throughout this process! They are super helpful during the ordering process, and even sent us a handwritten ‘thank you’ card afterwards! #Swoon)

Last but not least… a wine cooler! Our vision for replacing the funky wine bar in our kitchen was to place a wine fridge between two open cabinets, then install floating shelves overhead (to open up the space and make it feel less crowded, and also to display my totally bomb coffee mug collection).

Wine coolers are another appliance that seems innocuous enough, but has the potential to really break the bank. Here’s the tricky part: if you want to use your fridge as a built-in, you have to buy a unit that vents in the front. For some reason, this cutting edge front-venting technology makes the difference between a $200 wine fridge and a $1000 wine fridge.

After quite a bit of searching, we found this Magic Chef 50-bottle wine cooler. It does have mixed reviews, but we’re optimistic.

Replacing appliances was an unexpected splurge, but (just as we had with our cabinets…) we ultimately decided to just go for it (even if it meant moving the jacuzzi pergola into the ‘delayed projects’ list for a while longer…). Since our old appliances were in great shape (and surprisingly ritzy — JennAir luxury downdraft gas range, I’m looking at you), we were able to sell them on CraigsList to offset some of the expense.

Just a couple of kids turning a house into a home, one Pinterest fail at a time.
View all posts by Accidental Suburbanites →
This entry was posted in Home Improvement, Kitchen. Bookmark the permalink.

2 Responses to Shopping for Kitchen Appliances