Posted on May 11, 2017 by Accidental Suburbanites

We wanted a quick solution to spruce up our guest bathroom, and tide us over until we could fully renovate the space. First step? Spray painting the tile shower.

I know what you’re thinking: “girl, you did WHAT to your shower?!”

Just go with it.

Here was our conundrum: One of our guest bedrooms has its own private ensuite bathroom, which was a major selling point because it would be massively convenient for when R’s parents make the transatlantic trek to visit from England.

The downside? It was ugly as sin. 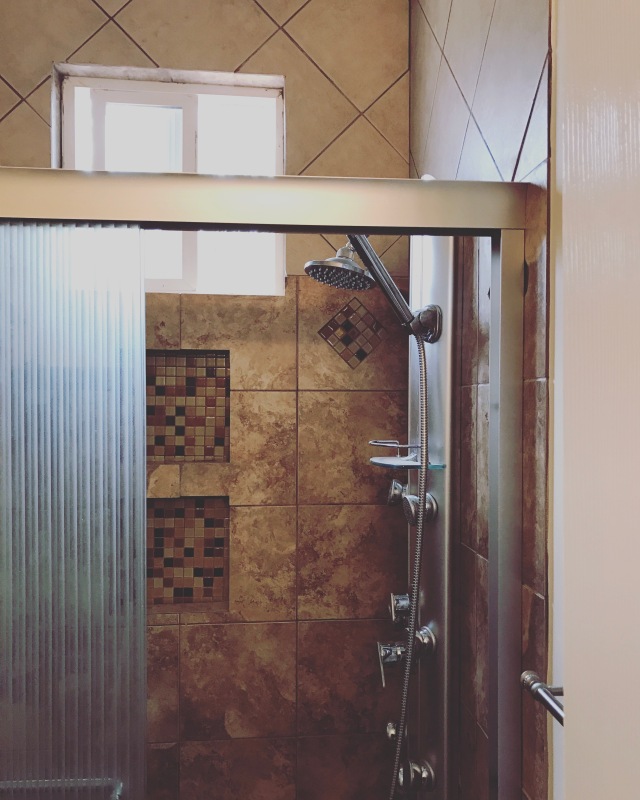 Half of me wanted to say “it’s not that bad,” while the other half of me was constantly expecting to open the door and find a pants-less Walter White cooking meth in the shower.

Since we knew we’d be giving this bathroom a proper facelift sooner rather than later, we didn’t want to invest too much money or time in this quickie makeover; we just wanted a temporary solution to spruce up the space until we could renovate it properly (i.e. replace tile, fixtures, etc.)

The biggest obstacle was the hideous tile.

I’m sure there’s a perfectly reasonable explanation for why someone chose this tile: perhaps they were seduced by whatever exotic name it had in the showroom (like ‘Sierra Sunrise‘ or ‘Canyon Clouds’ or ‘Nuclear Test Site 1’). Perhaps they were trying to conjure the desert-dwelling sprit of the American old west… or perhaps they just really wanted a shower that looked like the aerial view of Area 51.

Regardless, it had to go.

Rust-Oleum sells a Tub and Tile Refinishing Kit that is highly regarded by DIY bloggers — it’s an epoxy formula that covers over existing tile, and offers a fresh and polished finish. After a bit of research, I was convinced this would be our bathroom’s (temporary) salvation.

While researching the tile refinishing kit, I stumbled upon a very similar Rust-Oleum product: this epoxy spray. Though it’s intended for appliances, a quick scan of the Amazon reviews revealed that others had used it in their bathrooms — and to great success! My interest was piqued.

Spray paint a shower? Why not!

Paint was the easy part: I just picked up several cans of Rust-Oleum Appliance Epoxy Spray in White (word of advice: better to buy more than you need and return extras later, than to run out mid-project!)

Absolutely invest in a respirator mask (the fumes are out of this world, and that’s not even a reference to the Martian landscape-inspired tiles I was painting over). Seriously. This isn’t optional. Buy the mask. Also handy to have: a pack of disposable gloves (trust me on this one).

As far as clothing / protective gear goes, you want to dress like you’re getting ready for a zombie apocalypse. I’m talking full body coverage, 0% visible skin. Which is apropos, as the next step is to…

Prepare for the End of the World:

To prep the shower, I just gave the tile a quick scrub and let it dry overnight. The next day, I masked off any areas that I didn’t want to paint white (paper over the glass doors, tape on the silver trim, garbage bag around the shower panel, etc.)

Everything else was a free for all.

Another major consideration: air flow. Contrary to everything I thought I understood about the world, you really should not use a household oscillating fan or your bathroom exhaust fan system to combat paint fumes. It seems counter-intuitive, but when combined with spray paint fumes, fans can actually be more of a hazard than a help…

I was completely clueless on the complex inner-workings of fans until I spoke to my dad about this project. He cautioned me that the very flammable paint particles could potentially combust if they reach the fan motor, and the risk of turning your shower into a fiery inferno befit for a Rammstein music video increases if there is lint or dust accumulation in your exhaust system. 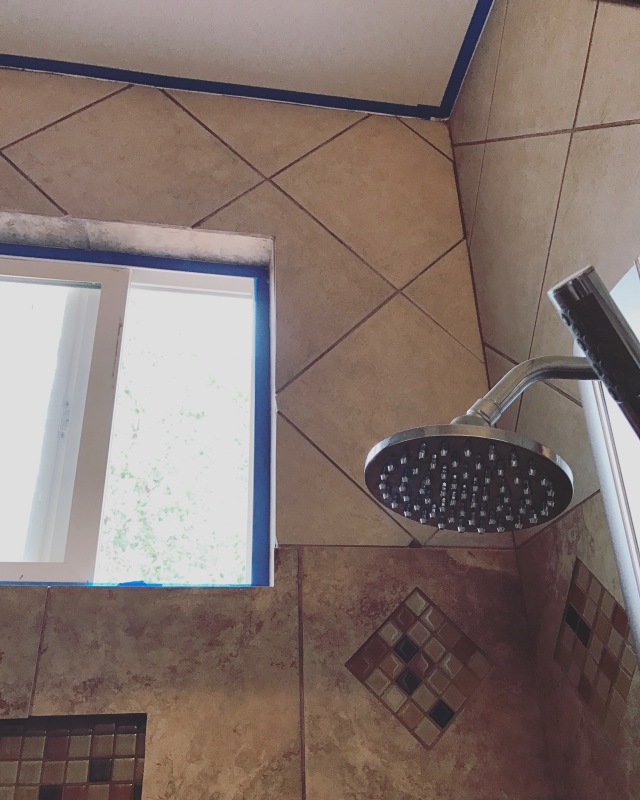 Thanks to a very conveniently placed window in the shower, I was able to get a morsel of fresh air coming into the room. Still, the situation was far from ideal (you generally want to avoid spray painting indoors at all costs, especially in tight spaces like a shower). I had to move slowly and work in shifts, tackling a small area at a time and then letting the residual particles in the air settle before I returned to paint the next section.

My approach to application could be best described as “just go for it.”

I started at the top and worked my way down, following the directions on the can to keep my strokes even and prevent any drips. The tile covered easily, but the grout was a bit more challenging (particularly any imperfections).

Besides the fumes, this was a pretty standard spray paint experience.

Once you’ve applied your first coat, you have a very small window of time to apply a second coat (we’re talking a few hours, at most). If you aren’t able to apply your second coat within that time, you must wait until the paint is completely dry before attempting a second coat.

Applying a second coat at the wrong time will cause the first coat to ripple, bubble and crack… and of course I learned this lesson the hard way 😉 Luckily I only lost one square-tile worth of space, and I was able to isolate the damage, scrape / sand it down, and start over.

After completing the shower, I moved on to spraying the tile floor in the bathroom…

The floor was easier than the shower, full-stop. The tile was lighter, so it covered with one coat (and a few touch-ups), and spraying downward was also a lot more manageable. (How gorgeous are these results?! Don’t they just scream for a fun stencil?!)

I had one final trick up my sleeve, and after giving the shower and floor (and myself) plenty of R&R time to dry (and heal from this whole emotionally taxing ordeal), I went in to put on my finishing touch:

I picked up two of these mosaic marble tile sheets and used them to add a little bit of pizzazz to the recessed shower shelves. They fit perfectly, and after filling them in with some leftover white grout from our kitchen backsplash, things were really starting to come together.

So how did the spray-painted shower turn out? Take a look…

I went into this project with the understanding that spray-painting a shower was definitely on the list of Top 100 Questionable DIY Projects. That said, this was a super quick, super cheap (and super crazy) solution to create a bathroom that we were (comparatively) proud of, before giving it the remodel it deserves.

If you’re looking for a quick fix on a tight budget, I think spray paint is worth considering. Though it’s not expressly intended for showers, the epoxy has held up through two weeks of solid use when R’s parents were visiting, and continues to look just as fresh and clean as the day I finished it.

I’d also strongly recommend the epoxy spray for floor tile. I was over the moon with how the floor turned out, and I’d do it again in a heartbeat.

If you’re looking for a more permanent solution, OR if you’re considering this project for a shower that gets more frequent traffic than a guest bath… you might be better off investing in Rust-Oleum’s designated Tub and Tile Refinishing Kit.

Note: this post contains affiliate links. Learn more about what that means here!

Just a couple of kids turning a house into a home, one Pinterest fail at a time.
View all posts by Accidental Suburbanites →
This entry was posted in Bath, DIY Hacks, Quick Fix. Bookmark the permalink.